Tom had a quiff in his black hair and strutted around as a teddy boy. Tim was an out and out punk, with streaks of red, white and black.

And they had attitude.

Yes, they may have been small but they had mountains of attitude.

‘Make my day, punk’, Tim would growl at Tom, as he rumblestrutted around.

Since Loco’s death, back in February, I had been pondering whether my guinea pig Blaze needed – or wanted – another companion. He seemed happy enough, eating and drinking. But everyone I spoke to and everything I read gave the same message – guinea pigs are social animals.

I posted a lonely hearts advert on social media, a friend replied with a link to a guinea pig rescue centre.

There was no luck there so I went back to where I adopted Loco and Bugsy (pictured below).

I found those two at the Pets at Home adoption section, where the ‘preloved’ small animals stayed, looking for a second chance of a good new home.

This time, there were four pigs in two cages – Poppy and Pepper and Tom and Tim.

Now, if Blaze was there, he would have requested the girls, I have no doubt.

And although he was getting on in years (six to be precise), how would I know if he was still capable of being a father? I have heard of the multiplication of guinea pigs, you start off with two and end up with… Hundreds!

No. I did not have the room to keep hundreds of guinea pigs.

That was on a Thursday. On the Sunday, Tom and Tim came home, and for the next few weeks lived in a spare cage, next door to Blaze.

I was told they were under a year old and were given away for rehoming for ‘change of circumstance’ reasons.

There were meet and greet sessions. Blaze studiously ignored them. Tim made his ‘motorboat’ sound and wagged his bottom (my previous pig Bugsy used to do the same). Worryingly, Tom tried to mount Blaze every time he saw him.

I knew this was standard boar behaviour in meeting new males but I was aware of Blaze’s grand age. He didn’t want this sort of aggro at his time of life.

Had I made a mistake? Would he be better off on his own after all?

I opted for two in the end as I didn’t want to be in the situation of having to look for a new partner for the bereaved male when their friend passed on.

But now I was fretting….

In the meantime I had bought a c&c cage. It seemed a good idea at the time, especially as I now had three pigs rather than the two, but when I put it together, at first it seemed cumbersome for my little living room.

Then I couldn’t figure out how to sort the roof out. I think most people who have these go roofless, but with the family jack russells Molly and Teddy visiting on a regular basis, it would be highly dangerous. 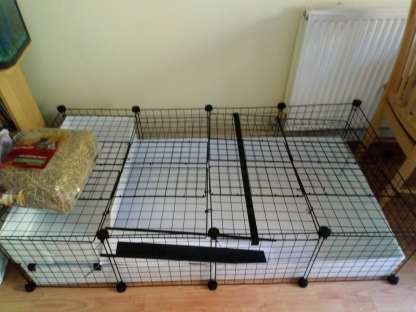 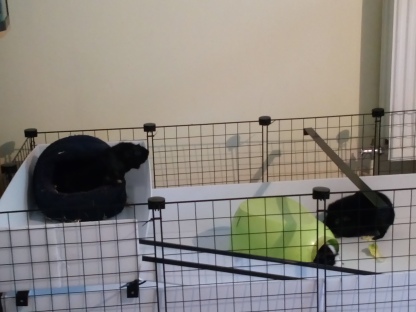 But I figured it out. I think.

And then it was moving in day. The trio packed their bags (well, food bowls, water bottles and ‘dens’ /beds/houses) and into their new home they went.

Blaze made a beeline for the cosy soft bed, not budging when the youngsters wanted to get in.

Tom had an unhealthy obsession with trying to climb onto Blaze while Tim ‘brrr-ed’ around the new vicinity.

But they settled down…

Tim and Blaze got on but Tom kept coming over, making a nuisance of himself with Blaze. Tim would then chase him away, as if to say, ‘stop bothering my friend’.

Maybe Tom was jealous of their friendship?

Then Tim was in a real mood one day and was starting to take it out on his new friend Blaze by trying to mount him.

I realised that although Tim seemed to like Blaze, he also had a temperamental personality. One that, in my eyes, was incompatible with elderly boars (male guinea pigs).

So Blaze moved out, back to his bachelor pad, where he lived for another month before he sadly passed on due to old age.

Oddly, the two youngsters seemed to miss old Blaze when he left, looking for him and even whistling at one point.

They now quarrelled a lot. So much that I thought they had scars from fighting.

Or was it ringworm?

When Blaze went to the vet for his bumblefoot, the boys went too. The vet gave them an injection for ringworm and the scabs eventually healed.

I’m still not sure if it was ringworm or fighting scars but it got to the point that Tom seemed scared of Tim, hiding in the ‘attic’ of their abode.

Were they fighting over Blaze? Blaming each other for his absence or was it something else? More importantly, will I need to separate them as well?! 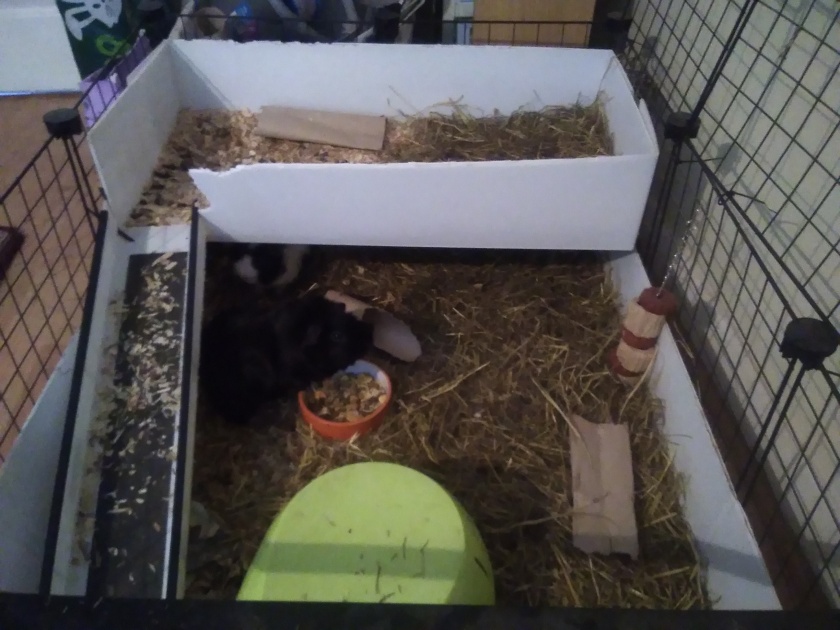 But eventually, they settled down, and now they get on better, except for the odd tiff when one thinks the other has something past him.

Tom has become nearly as cheeky as Loco, demanding tasties when he hears rustling. He’s getting rather chubby as well. The more reserved Tim has started to join in the begging.

Their home now looks a little frayed along the edges – or more obviously, up in the attic – apparently the walls taste good!

Whoever says Guinea pigs don’t have personalities have never met the residents of Cosy Cottage! 🐹

19 thoughts on “Tom and Tim come home to Cosy Cottage”