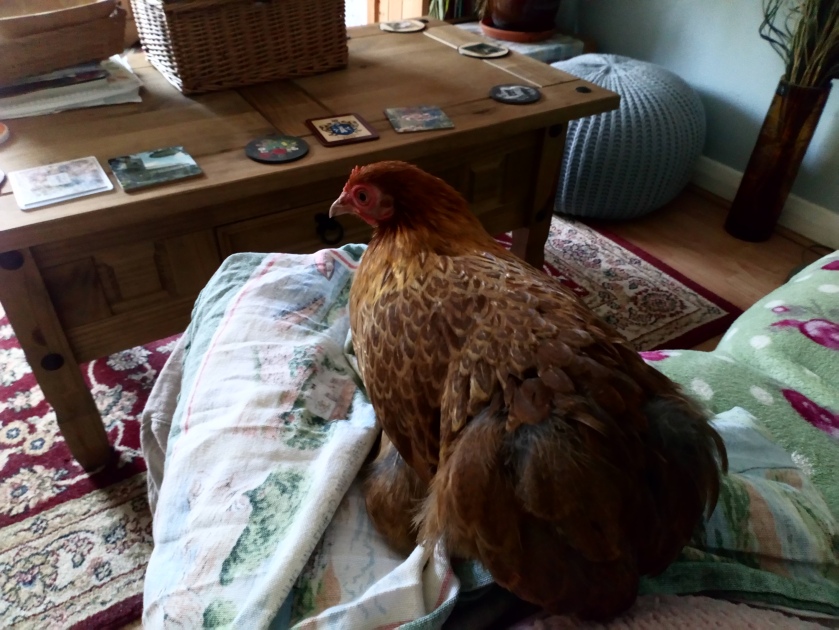 Florence at her human’s house

Florence was a tiny slip of a girl, small and slender, nervous of everything and anything. The world was a terrifying place for our Flo. She was a real ‘Chicken Licken – The Sky’ s Falling In!’ character (This is a story of a chicken who believed the world was ending when an acorn fell onto her head).

Whether Dottie had taken her ‘under her wing’ in a caring manner or was being a bully, I couldn’t figure it out. They would cosy up in the same nest box at bedtime but then I would see Dottie pecking Florence. A friendly peck? Or a nasty one? How could I even tell?! Worried, I would lift Dottie from the box and place her in the other one (Jemima having decided to roost on top of the box). Then I would read that, while adjusting to the new pecking order, this type of – what I would consider – bitchy behaviour among chickens was perfectly normal. They were just trying to figure out who was boss.

A similarity might be politicians playing dirty in order to have a leadership contest.

While Florence chirped like a baby, Dottie would continually cluck to herself. While Florence was stressing about the possibility of the sky falling in, Dottie was calculating and plotting. She had her eye on the top job and there was just one lady in the way. 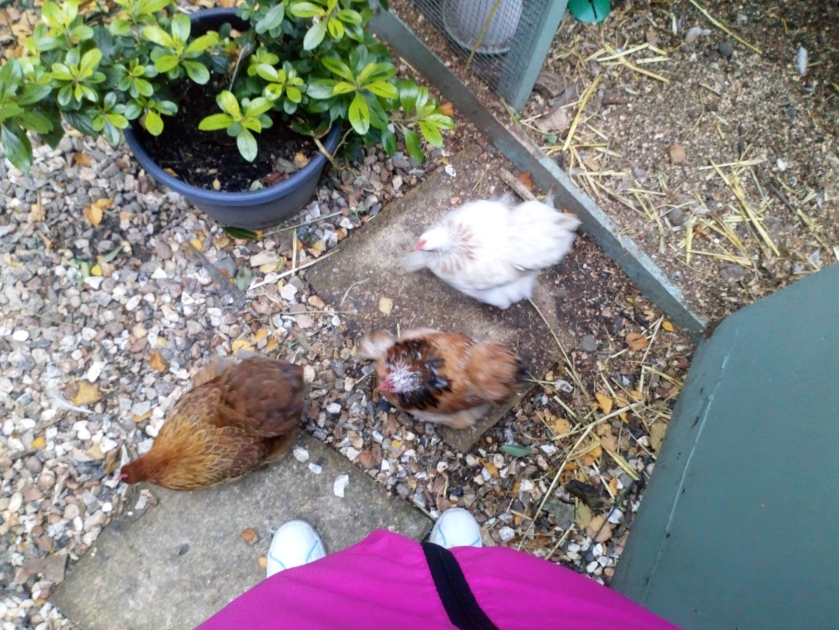 Florence leads the way, Dottie and Jemima behind

Quiet, confident, self-assured Jemima. Jemima took no nonsense from anyone. She was sure of her place in the world, what she liked and what she didn’t.

Alas, Dottie couldn’t compete with such leadership material. She respectfully relinquished leadership to Jemima. So it was Jemima, Dottie, Florence. Poor little Florence. I did feel sorry for her.

One morning I noticed blood on her beak. Horrified, I brought her into my house, cleaned the blood up (it wasn’t much of a wound but I had heard of hens becoming nasty if one of their flockmates started bleeding) and fed her lettuce as a treat.

Was that the moment downtrodden Cinderella became a princess? 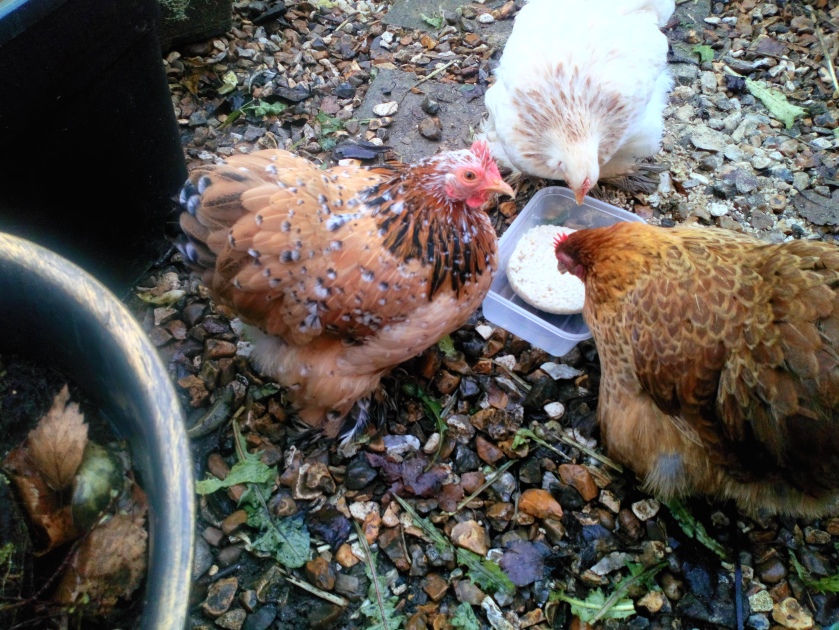 Dottie, Florence and Jemima tuck into a ‘bowl’ of porridge

Somehow, from that moment on, Florence gained confidence fast. Her comb grew bigger, better than the other girls! Her plumage fluffier. Instead of running away from scary humans, she squatted, letting us lift her. Instead of hanging back, she was first out of the coop and first in to roost. When treats were being given, she was jumping up to grab any greenery from my fingers. ‘Cinderella’ took advantage of her ‘ugly sisters’ ‘ drab demeanour (due to moulting they were losing feathers) and proudly showed off her pristine, shiny coat in comparison.

Where was the Florence of old? She had disappeared!

Oh, and the other event which coincided with Florence’s amazing transformation? She started to lay eggs. 🥚🥚🥚

1. The pecking order is the social hierarchy of a flock. They decide who is the ‘ruler’ and who is at the bottom. If there is a cockerel, he would normally be the leader.

2. Once a flock has established its pecking order, the hens live together peacefully.

3. The top (dominant) hen can peck all beneath here. The second dominant can peck all except the top hen and so on.