In 2015, I was all about the chickens. After seeing an article about ex-battery hens looking for homes, I could literally imagine them in my garden. My side garden wasn’t doing anything. It was just there, a spare piece of land filled mostly with stones or random plants, I knew not what they were. So that tiny plot was obviously waiting for my hens, right?

So I joined chicken internet forums, asked questions, made notes of the answers, bought books, became a regular visitor to Fulwood Library (great customer service, thanks Caroline and Chris!) read and researched, perused and contemplated. I saw images of poorly hens and dead roosters, articles on culling and roast chicken recipes, library book chapters on coops and breeds. My relatives told me about rats and smells and noise and neighbours who would report me for annoyances.

I attended jury service and bought a book one lunchtime from Oxfam about ultra-small smallholdings. Somehow during deliberation, among seriously talking about what verdict to reach, there was chat from jurors who knew people who had chickens. So many real people – that is people like me who had normal gardens, not acres – had them pottering about their patios.

For five months, I chatted about chickens.

In March, Simon asked me when I was getting them.

In May, he asked again. Had I got the garden ready for them yet?

Procrastination was in charge though.

I dithered because chickens seemed too ‘alien’ to me, too unusual. It felt like I would be giving farm animals a home rather than pets. I wasn’t a farmer. I shouldn’t have livestock.

And the pictures of poorly hens, queries about rats, criticism about smell… And then there was a case of bird flu not far from me! The last straw!)  🙁

So I rehomed Loco and Bugsy (I did not choose those names!) instead. Not hens, but two guinea pigs who are very endearing and cheeky, and were residing in a pet shop’s Adoption Section.

Loco, the black and white guy, thinks with his stomach and is a first class beggar. Bugsy, the punky red head, can be a tad irritable and reclusive (not as much now he knows there’s food around so it’s worth getting out there to see what’s happening! 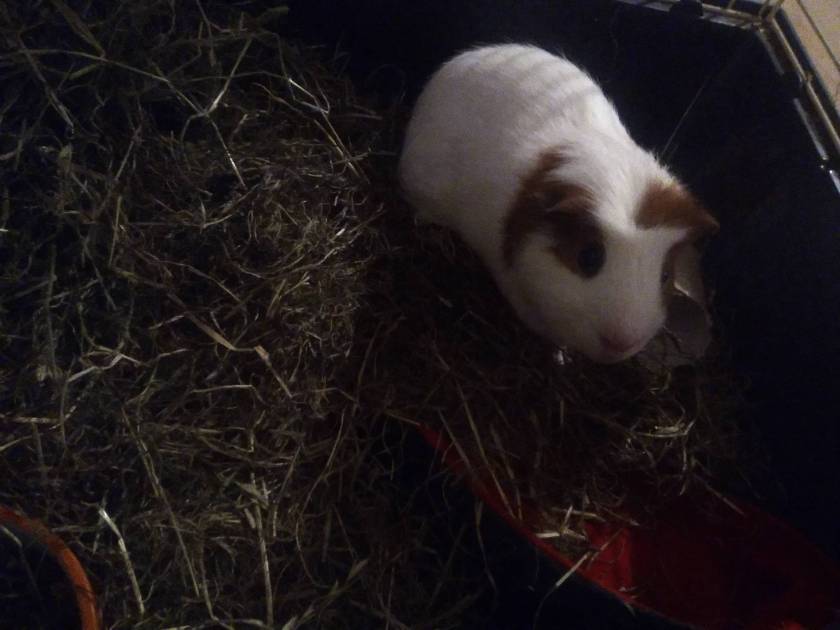 but Loco is his best pal and he misses him when he’s not around.

I had guinea pigs as a child. I knew how to look after them. If you put in the time and effort, they’re pretty easy to care for.

Will there be a Year of the Hen? 🐔